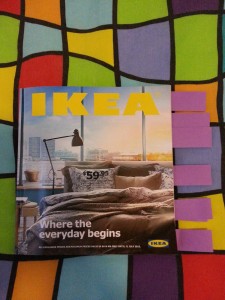 I rescued this poem from seven ‘blurbs’ combined from the 2015 IKEA catalogue.

As always, the important distinction between my rescuing process and other process-based approaches such as ‘finding’ poems is that I do not select a complete phrase or sentence; after I transcribe the text I jumble it so that all the words are in random order, and then I choose words as individual building blocks. The resulting rescued poem is usually quite surprising, then, because I take the words out of their original context and impose my own creativity on them, combining them to give a new twist – as is the case with this little rescuee.

This rescuee is from The Celtic Twilight by W B Yeats (p 9) and The History of the Town and the County of the Town of Galway (1820) by James Hardiman (p 65). It’s the first one to have a bit of a conversation going on.

The spirit standing in the doorway
had an infinite, heavy sadness to it;
a weight of troubles from another world.

Is you dead, I says.

What thinks you, he replied.
When I was living my enemies took power,
destroyed my castle, my kingdom.
What I feared more than anything else came to pass:
terrible misfortune on the land,
winds of damage turned families and visionaries to peasants,
pleasure of music and poems a memory,
a place whose masters have no heart
an earth whose heavens are foregoing…

They are so distant from me, said he, neither day nor night,
time nor words, make me feel that…
If you would talk to… if you would…

His voice began to fail.

They see me as half-mad, I says, queer as a copper shilling.
Talking to you, about you, is no wise things for me.

So I has written this down
I is no mystical person, I is already damaged,
lodging in this place
longing to trim my own winged mind.

This short but intense poem is getting its first airing here. I rescued it from two books by Miranda Green: Celtic Goddesses: Warriors Virgins and Mothers (p 77) and The Gods of the Celts  (p 35).

Silver horses run on alien lands
guardians of gold hands and Ireland’s stories;
vigorous, the king of wood and word,
sexual, the bride of stone and roots.

Mortal is the waterbird, believing
that rivers shape-shift, carrying divine
spirits to a savage transformation,
to a form that forced a human birth:

crushing meaning; giving them a name.

This is an unusual rescue-ee in that the source texts are two poems by William Wordsworth: ‘Lucy Gray’ and ‘Daffodils’. (I usually rescue poems from prose, not poetry.)

The result is definitely influenced by how well I know both poems.

She is all, and night is just

Sound never looks this lonesome.
She wandered, small,
overlooked, scarcely there.
She was inward, broken,
dancing vacant
on solitary wild.
Night was tossing
the wretched daffodils.
She danced, wanton,
chanced a glance
at lantern moon
shine sprightly golden
reached downwards beside
on milky snow.
She gazed wide at lonely heaven
and through sparkling
stars tracked waves of twinkle.
She danced, pensive,
yonder mother mountain
a steep, stormy rise homeward.
She danced, wept,
her footmarks lost,
never to be seen.

I rescued this poem from My Life in Advertising by Claude C Hopkins (p 205) and The sea by John Banville (p 143).

I rescued this piece from Captain Corelli’s Mandolin by Louis de Bernières (p43) and Sons and Lovers by D H Lawrence (p107).

This little rescue-ee is from Eva Luna by Isabel Allende (p217) and The Curious Incident of the Dog in the Night-time by Mark Haddon (p207).

Beneath the hoping measured
narrow echoey train
was roar roar
was stutter stutter.

I rescued this poem from This is not a novel by Jennifer Johnston (p33) and If on a winter’s night a traveller by Italo Calvino (p148).